This little piece was brought to me by Carlos Leschorne or Montreal. I have never heard of this movie, as its a Bollywood production about a space scientist. Released in 2006, the film was screened at the Jerusalem Film Festival with rave reviews. The film, directed by Bollywood producer, Rakesh Roshan, was filmed in British Columbia, Kassuli and Nanital. I must say, the .5 seconds that the train appears in, is either a major error on the Directors part, or the Canadian Pacific must have one hell of a Trackage rights agreement to run trains from Canada to India!

The train appears for only a brief second, but the train is clearly North American, and the “CP” on the front of the locomotive is a dead giveaway to anyone who knows anything about trains, that this is a Canadian Pacific train rolling through British Columbia. Whats more is, then when I zoomed in on the lead locomotives number boards, we have CP 9776 and 9721. They two locomotives are General Electric products, AC4400CW’s, built in Erie, PA. CP 9776 (Serial #54471) is the sister locomotive to another famous Canadian Pacific AC4400CW, CP 9777, that starred as AWVR 777 in the hit 2010 movie “Unstoppable.”  You can read about the 9777 in a previous blog that I did here. Shes just another, everyday CP AC4400CW, rolling off the miles.  The CP 9721 (Serial # 95351) was built in 1998, along with the 9776. 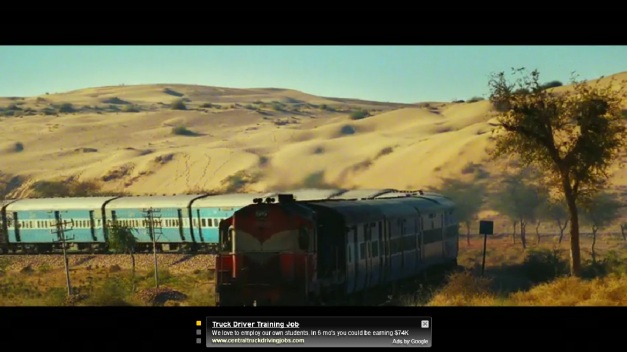 If you ask me, the director should have givin some serious though when choosing a scene with a train in it. The image above shows a typical Indian Passenger train that appeared in the movie “Slumdog Millionaire.” Even the novice viewer looking at this blog can tell the obvious difference between the locomotives and the scenery of India and Western Canada! Like I said in a previous blog, producers never think twice when it comes to trains their films. A locomotive built in 1998 could pass a locomotive from the 1950’s, and for all they care, they look exactly the same! I have always implored the movie industry to do their homework when it comes to trains in the films. Its one thing when you can’t find an appropriate era train, but when there are places where can easily find and use one, then there is no excuse why a producer has to use a train that is not even correct for either era, or in this case, LOCATION.

If you want to watch the clip that this screenshot came from, click this link!  It does have a catchy tune.

I hope you enjoyed this blog! I know it was a short one, but I thought it was funny that a director could pass off Western Canada as India. In my book, that is what I call an EPIC FAIL! If you have any other ideas that you want seen done, just click on the “Submitting Ideas” tab under the tab! Until next time, HAPPY RAILFANNING!

3 comments on “Canada sure does look a-lot like India: Canadian Pacific goes Bollywood!”